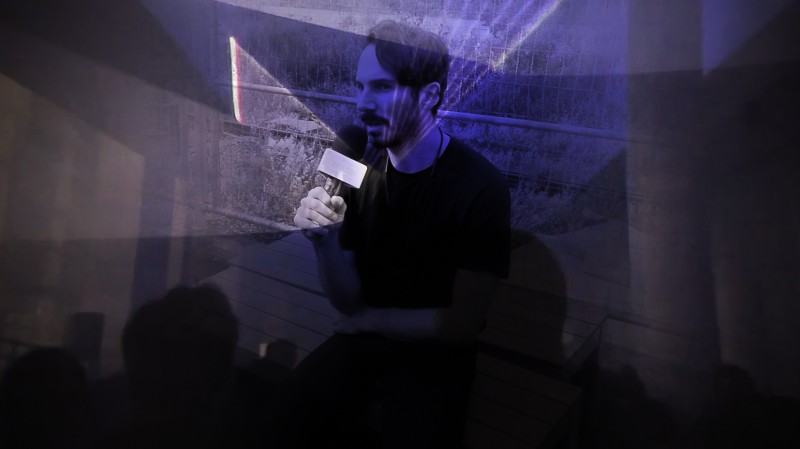 Radio 3FACH: When I ask my friends what they think of your music, they like it or not. They said it was something like when you want to sneeze or yawn but it never comes. So what diverse feedback do you get? What was the craziest feedback you got?

Lorenzo Senni: I think that these reactions are even more extreme when you play live. Because, if you listen to some music on the radio or on a podcast, there is less expectation. For example in a live set, in a club context or at a festival, there are some kind of expectations for what is playing. So, one kind of stronger reactions of people complaining at me while I was playing was people coming up on stage, at my desk saying "Hey, pleease come on, drop it." "Drop this kick." or just saying like "DJ!!" I remember in Turkey in Istanbul, people were saying to me "DJ!! Boom Boom" They wanted the kick. So, I think this is the most extreme reaction I got while I was playing live. People (were) really stressing out about getting the drop and that it doesn't really come. R3X: So, who are you making music for? Lot of musicians do it for the people to feel good, but when you say that the people are freaking out because of your music, is it mostly for yourself or for the people that understand what you intend to do by analysing the structure of the build up in the music?

LS: I studied musicology, so I can see now that everything I do, the music I make, it's always to understand something at the end. Of course I make music, and music exists in itself (and) the concept behind it doesn't matter. But for me it's also a way of discovering things for real. So, when I decided to start to work in this direction, working with this sounds, this musical structure, conected to a context, that is the rave, club context, the euphoria, the party, but not giving this release with the drop, it was a conceptual choice. But, of course I don't want the people to have a manual or an instruction to enjoy or not my music. So, for me it's important to play and to see how this is working through the music. But actually, I make music for everyone, you know. I understand, that one of the characteristics, that it's not releasing in a big kick or not releasing in something at all, that it just keeps on going and going and maybe it's developing just a bit, is something that not everyone could enjoy at one hundred percent. So maybe they don't like. But there are some people that understand, that this is satisfaction (even) without a proper drop. R3X: What was the rave scene like in Italy back then, that you are pointing at in your music? You are taking a lot out of these experiences of growing up in an emerging scene of hardcore techno and punk in Italy. Were there more illegal parties or was that something really trendy that everyone started to do?

LS: I say that I basically grew up in two extremes. In my teenage years I was playing in punk hardcore bands and I was also going to these huge parties and raves. The parties were in Rimini in my hometown there were huge clubs, where you could fit 7000 people. And it was really at the point that trance and and techno was mainstream. So, actually my friends from one side were all interested in this kind of stuff and all my other friends were playing in bands with me. So, I really was at two extremes. Especially because the punk hardcore scene was the straight edge scene. It was about not drinking, not using drugs, while the other guys were the exact opposite. I grew up in this context. This is the way I experienced this parties. It weren't illegal raves, it was just really huge raves. This music was really popular in that period. I was going there completely sober. So I was experiencing this context in a very personal way. This is why I started to call my music rave voyeurism, because it's really connected to the way I was experiencing this places, this enviroment. Being kind of a voyeur. I was understanding what was happening at one hundred percent, while my friends were in another state (of mind). I was not complaining, I was not the one saying "I want to go" or sitting on a sofa and waiting for driving back. I was just experiencing this in a different way. That was really important to also develop different ideas of music. R3X: So, now what kind of gigs and concerts do you enjoy the most? Do you even go to concerts still?

LS: Yes, actually I always say that, if I wasn't enthusiastic about music anymore, there wouldn't really be a reason to keep on doing music. I think everyone for whom music became a job, started with a big passion and enthusiasm by going to concerts and also producing music at home. I still follow music a lot. I go to concerts and I'm lucky because many times that I play around, there are other people playing with me. I have to say that, what I'm listenig to is still a lot of rock music. So I go to rock concerts to see bands that reunion or old bands that are coming to Milan. Even if I am happy at festivals to see a lot of electronic music, the concerts I went to see were Deftones, At The Drive-In or Negative Approach - an old band. These are the concerts I go to. And the next big gig of mine is at Sònar in Barcelona, I'm really looking forward to that one.